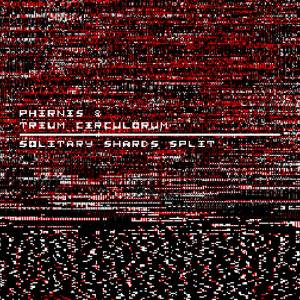 While Trium Circulorum is a new name to me, I picked up this split cassette based on the involvement of Phirnis. Dave and I have chatted about this Austrian based artist on The Antidote a couple of times now. Previous releases have deftly combined musicality with abstraction and electronica, but his contribution to Solitary Shards is a glorious collage of noise eras past. A series of vignettes that can only be listened to as a whole. Trium Circulorum’s side is awesome too.

Phirnis opens up side A with some Merzbow crunch that exhales into a rhythmic pulse, and then blooms into a flock of birds settling into the trees at sunset. Further on we get the cavernous sound of delay drenched feedback echoing into nothingness. And, at the 19 minute mark an unencumbered head bursting wall of harsh noise that switches into a cracked and decayed transmission from somewhere beyond. He finishes with what sounds like a washing machine or dishwasher, something mechanical but watery, all distorted and frayed and fading out into tape hiss.

Phirnis mentioned to me on Twitter that he really wanted to explore some old school Noise on this release. That vibe definitely shines through. But he manages to do this without smashing your face in, as many records did in the hey days of Noise. His series of sound explorations are a playful homage to the scene as well as shitloads of fun for your ears.

On the flipside, Germany’s Trium Circulorum conjures up a serious dark ambient drone. He traps the listener deep in the bowels of some cave-like abandoned subway where air vibrates through rust riddled ducts, and unexplained things rattle and scatter in the shadows. Occasionally a pipe loses steam, a metallic clank skitters out of the gloom, a low vibration lurks around the corner. This is 30 minutes of blackened unease akin to Abruptum’s quieter moments, or even Burial Hex’s Initiations.

10 years isn’t a long time, but lately it feels like artists are revisiting the tropes of noise and exploring the sound with less emphasis on volume and abrasion. Solitary Shards is a fantastic example of this.