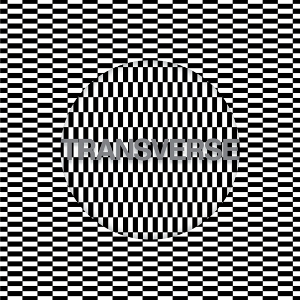 Deep, dark, throbbing and spacious. Unworldly. Electronic but weirdly organic. Familiar and yet unlike anything else you might have heard before. Transverse is all of these things and more.

Chris Carter and Cosey Fanni Tutti, the long-standing duo born of cult faves Throbbing Gristle teamed up with youngster Nik Void of Factory Floor for a one off performance in London last year, and the result was this. Transverse is a monumental improvisation driven by Carter’s undulating rhythms, which pulsate in a sexual, bottom-heavy dance. He prepares a sparse and spacious canvas which Tutti and Void decorate with hyperventilating guitar static, shrieking computers and garbled incantations.

Transverse might be a distant cousin of dance music, stemming from a simple 4/4 throb, but nothing else about this is conventional. Void doesn’t play her guitar, she wrenches noise from its strings while Tutti throws up electronic ephemera and manipulates her own voice into something ritualistic and menacing. The smoked out halls of Dub seem to be an influence on the blunted sound of the record, the way sharp noises snap into focus and then echo back into the fog.

The final track on Transverse is a studio take of part of the London performance, and it’s interesting that this turns out to be the weakest moment on the record. It lacks the cavernous, spontaneous and ceremonial feeling present throughout the live tracks. It’s easy to imagine how powerful Carter Tutti Void must have sounded on stage, each artist focused intently on contributing an individual ingredient to the mix. We should be thankful they chose to release their particular brand of noise as a live recording. Transverse is a must for 2012.