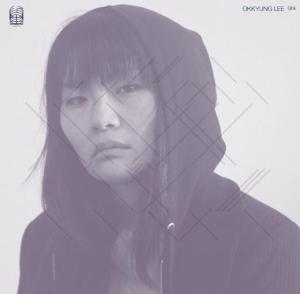 I’ve always loved the Cello. Not that I’m a connoisseur of Classical music or anything, but there’s a dark, moody and romantic quality about the instrument which has always appealed to me. Its guttural, groaning and percussive sounds can be amazing. See the soundtrack to Alfred Hitchcock’s Psycho if you want to know what I mean.

But I have never heard the Cello being played like this. Okkyung Lee completely warps your preconceived ideas with a playful desire to explore the instrument’s unknown sonic frontiers. Across nine improvisations Lee scratches, stabs, scrapes and bows an astonishing array of noises out of her wooden muse. On the Crow Flew After Yi Sang she kicks off with frenetic energy, veering wildly up and down the fret board striking notes at whim and signs off six minutes later droning gently on a single note. On Two to Your Right, Five to Your Left she channels Primus’s Mr Crinkle with a circular low-end rumble that eventually disintegrates into croaky, rusted bed springs. Later on, in the closing moments of Meolly Ganeun a distortion pedal allows Lee to make her Cello sound like the sweat fuelled madness of a Lightning Bolt gig (minus the drums).

How the fuck does a Cello traverse this sort of terrain? There are moments on here that rival some of the damaged noisegasms of artists playing far less conventional instruments. It’s awesome.

At the risk of taking away from Lee’s talent, part of the record’s charm is the smart and eccentric production of Norwegian noise-monger Lasse Marhaug. He recorded Lee jamming the fuck out in a variety of locations, using a 1970’s cassette recorder and some meticulously placed microphones. The result is a series of recordings that amplify the Cello’s intricacies and give the feeling that you’re in the room, right beside her. You can actually hear her bow on the strings, sound vibrating within the instrument’s hollow body, her fingers sliding along its neck and scraping along its strings. Despite the madness and abandon of her improvisations, the overall vibe is warm and full of life.

Okkyung Lee has more than 20 releases to her name but I’m ashamed to say that this is the first time I’ve heard of her. She has a back catalogue of collaborations with an astonishing list of music’s experimental adventurers, that will definitely be worth checking out.

I’m very confused about this record. Over at The Antidote Podcast recently, Dave and I discussed Holly Herndon’s Movement and to be honest, but fair, neither of us understand how this is making so many music nerd’s year-end lists. Strip away her experimental moments and what you have is a straight-forward dance record.

Herndon is currently completing a Doctorate in Electronic music at Stanford. In interviews she talks a lot about a desire to demonstrate that making music with a laptop doesn’t have to be impersonal or inhuman. This is a great idea, and Herndon’s strategy for achieving this is to make a record that uses the human voice as an ‘instrument’ to be manipulated by her laptop.

The trouble is everything on Movement sounds distinctly like it’s come from a machine. The sound is very cold and clinical. Even the glitches are perfect and obviously man made. I can’t find much that’s human here. On the record’s centrepiece Breathe, which revolves solely around the sound of Herndon inhaling and exhaling, this most primitive and essential of human functions has had the life digitised right out of it, which revolts against what Herndon talks about setting out to do.

Across its 35 minutes, Movement slips between fragmented sound collage like the furthest reaches of Autechre, and Acidy Electro dance numbers aimed squarely at the dance floor. Even these come across as ice cold, European nightclub soundtracks or a club-friendly version of The Knife.

Perhaps the issue is with me. Having read a bit about Herndon before hearing this I was expecting something totally different. Less robot programmed to act human, and more Android à la Ash from Alien (minus the whole kill-off-the-entire-crew-to-bring-back-the-Alien thing). Overall it’s not that Movement is terrible, it’s just not that interesting. If you want a record inspired by the human voice check out Bjork’s Medulla – she shrieks a lot while Rhazel and Mike Patton back her up, and it’s kinda awesome. Or better yet, for a completely human sounding electronic record, check out the sinewy gloop that makes up Laurel Halo’s debut full-length Quarantine, which coincidentally made it into my top five for 2012 as discussed on The Antidote.

My least favourite Merzbow records are the ones focused on his drumming (is that him drumming on Aqua Necromancer? Cos that record is an exception to my rule); they seem like a dull exercise in cock rock excess. Why am I talking about Merzbow here? Because Death Unit features drum maestro Chris Corsano, and in many ways Infinite Death sounds like one of Merzbow’s drumgasms. Yet Corsano is a much more sophisticated sticksman than Mr Akita and that makes all the difference. I love this record.

Infinite Death emphasises the twin-drum attack of Corsano and Trevor Tremaine (Hair Police). Their jazz-thrash backbone is wrapped up in synth squawks provided by Carlos Giffoni – who’s solo stuff hasn’t appealed to me so far, although I appreciate what he’s doing for the Noise scene – and blown out guitar mush provided by Brian Sullivan of Mouthus.

The first of the two tracks opens with some fantastic drum work from Corsano and Tremaine, lots of stumbling toms and sizzling cymbals before shit explodes into a balls-to-the-wall, skronky noise-fest. Each member throws everything they’ve got into the mix and makes sure it sticks. The resulting, throbbing mess is a shit load of fun and short enough not to get old.

The second track, recorded live, is where my heart lies though. It’s moodier, lengthier and more dynamic. Groaning bass tones expand into shuffling drums, the sound thickens up, dies off and then springs back for an orgiastic crescendo. I get spine tingling visions of these four guys with their arms flailing, hair whipping (except for Corsano, because, well, he’s bald) and generally thrashing their instruments. Muppets style.

As mentioned, there are strong similarities between this and Merzbow’s ‘drum’ records. But Infinite Death works so much better because there’s a group dynamic at work. Where Merzbow’s drumming has a masturbatory aspect to it, Death Unit is a collective focused on competing elements that compliment each other’s contribution to the whole. At the end of the day, though, this is loud and frenetic and multi dimensional. It might take a few listens to make out the entire jigsaw but fuck yeah it’s worth the effort. Artwork by Dominick Fernow of Prurient. 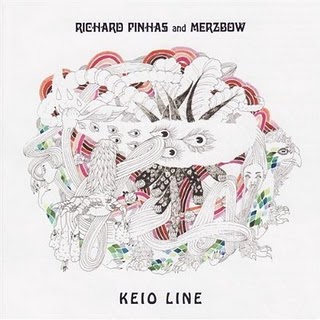 There’s a whole Yellow Swans thing going on here, the way ingredients are added bit-by-bit and mixed into a gooey molasses. Pinhas’ chiming guitar reminds me a lot of those earlier Yellow Swans records too.

That reference aside, goddamn there are some beautiful frequencies, tones and sparkly sonics across the two discs, six tracks that make up Keio Line. Each composition breaks the twenty-minute mark and is given plenty of scope to slowly, ever so slowly unfurl at a painstaking pace. They build up to crisp glaciers of nothing and leave you hankering for more. Keio Line seems like an apt title for this record. The reference to Japan’s maze-like underground railway system is a visual that compliments the looping lines of guitar and electronics.

Merzbow shows immense restraint though out, relying on distant rumbles and gurgling electronics to cushion Pinhas’ compressed, sustained, distorted, modulated and overdubbed guitars. Mr Akita could easily have melted the face off Pinhas, but the subtlety shown by both musicians creates fantastic tension as their ‘instruments’ push and pull against each other for pride of place. Mr Akita obviously admires Pinhas prog rock roots and is more than willing to let the man’s guitar soar. I can totally imagine Pinhas soloing somewhere on Aqua Necromancer.

I haven’t heard Merzbow sound this restrained since he collaborated with Boris on Sun Baked Snow Cave, and even that was a doomier affair than Keio Line. Why doesn’t Merzbow explore this territory more often? He has an insurmountable number of abrasive releases to his name – and yes, there is variety among them – but surely this is a facet of noise he could delve into further.

Sometimes I struggle with Merzbow’s multi-disc releases, but whenever I put Keio Line on I lose myself and it’s over way too soon. I’ve read rumours that the pair will release some live collaborations on Cuneiform Records later this year, to compliment their collaborative effort with Wolf Eyes released on the same label in 2010. I need to hunt all that shit down.